I Found a Unicorn and, For One Magical Hour, Had Honolua Bay All to Myself 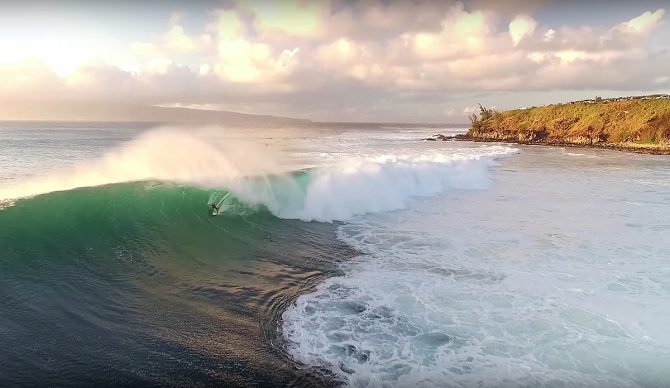 Honolua Bay all to yourself? This is certainly unheard of.

I first heard about Honolua Bay, in earnest, from William Finnegan’s book Barbarian Days: A Surfing Life. Like everything else in the book, he describes it beautifully. It’s not just the obvious and exotic aesthetic beauty of a tropical bay on Maui; he properly conveys the reverence the place demands in a way that even a non-surfer can understand.

Living in Los Angeles, I didn’t think I would ever get near Honolua or any other waves Finnegan talked about anytime soon. Therefore, it was a bittersweet surprise when a girlfriend told me she would be leaving California for Maui. While I was sad to hear that she would be leaving, I now knew I had a place to stay in Maui. Honolua Bay just got one step closer…

So I planned a trip for the end of winter to get the hell out of the city and hopefully score some proper Hawaiian waves. I wasn’t hellbent on ripping Honolua but I was dying to see it. When it comes to waves of epic stature like Honolua, Pipeline, Rincon, Puerto Escondido, or similar, sometimes just being there is enough to catch the vibe.

I kept my expectations low for the trip thinking maybe, just maybe, I could have a rad session on a smaller day with a big board and a mellow crowd. There were no delusions of grandeur, where I’d surf triumphantly on waves of consequence amongst and against a heavy local crowd; rather, I envisioned spending some quality time under the island sun while floating in turquoise waters and picking off some fun waist-high rides. That would be sick.

Once on Maui, I stayed on the north shore in a tiny bungalow near Paia. While it was roughly an hour from Honolua, it was pretty close to Ho’okipa, a consistent, if often windy, reef break where I put in most of my time. It was there, in the crystalline, sea turtle-filled, water that I realized a few things. First, my surfing had significantly improved since the last time I came to the islands (that being three years earlier when I tried and ultimately failed at catching waves on Oahu).

Second, I realized that riding a high-performance thruster on real waves is amazing. While a board like that can be fun at Trestles or Blacks on a good day, often times, California waves should be approached with more foam.

Last, I realized I really wanted to ride Honolua…

I must’ve had nearly 50 variations of “You see that swell that’s coming in?” conversations with the locals, always hoping to glean some precious insider knowledge that I, as a visiting haole, did not have. I would also, without a doubt, make mention of Honolua, like, “…I wonder what it’ll be like in the bay…”

Once the sacred wave was mentioned, I always got the same responses.

“Crowded. Better off going somewhere else.”

“Haven’t surfed there in years, too many people.”

“Probably good, but not worth the struggle.”

Ok, so, the locals were clearly jaded on the wave I’d spent years dreaming about. Yet, I was undeterred. I was going to at least check it out and even if I only caught one wave, I would be stoked.

The next swell came in with a relatively short, three-day window. On the first evening, when it was still building, I surfed closer to Lahaina and the waves were juicy and rippable. Regardless, I couldn’t help but think I wanted more size and speed. We camped in the car near the beach that night and when we woke up the waves were huge. We made the short drive to the cliffs above Honolua and watched as Neptune and Poseidon came to life in the bay below. I remember seeing four guys out at the point where the waves were massive.

I watched in awe for the next half hour as those four guys rode giant waves with perfect form. There may have been a few waves that weren’t finished but, for the most part, they made it look easy. Paddling in and popping up with confidence and flying down the face into big bottom turns that set them up to either pull into the barrel or take a high line to the shoulder where they would turn and send out sprays that looked like monsoons.

I knew I wouldn’t be surfing there that day; it was too big.

Twenty-four hours later, the swell had faded. On the entire drive there I wasn’t even sure if there would be any waves left. Once there, I spotted another four guys on the point, only this time, by the looks of it, it was two dads and their sons. The inside section of the bay had been a steady and thick line of heads the day before and today it was empty. Not knowing the break at all, I was a bit confused. If there were waves, where was everybody else? And if there weren’t, what were those guys doing out there? I watched for nearly 10 minutes as nothing happened, only bumming myself out. Then, finally, I spotted a line of rising water moving towards the point. It grew and grew and by the time it reached the reef, it was a beautiful wave. One of the groms hopped to his feet, encouraged by hoots and cheers from the group, making a stylish display of turns on the face of the wave.

It was hard to tell size from that distance but it certainly looked manageable. I geared up and got stoked to paddle out without actually knowing where and how to enter the lineup. The coastline was primarily a series of jagged rocks getting pummeled by whitewater. Usually, you can watch someone navigate an entry and retrace their steps at an unfamiliar spot but there was no one around on this day. After some observation, I picked a cautious line of attack that, even if a set were to come, I wouldn’t be too far from deep water. The swell was fading and the sets were slow but even so my heart raced as I approached my jump off point.

Once I reached the lineup I nodded at the two dads and their sons and it was all smiles from there. No stink-eye whatsoever. We made some small talk when I started off by saying the kids were ripping.

“Yeah, it’s only their second time out here so we’re keeping our eyes on them and encouraging them into waves,” one of the dads said. “It really helps that there is nobody else out.”

“You can say that again,” I replied, “and don’t worry about me either. If they’re in the zone I’ll let them take the wave.”

“Right on, thanks. But we are heading in soon anyway so it’s about to be all yours.”

I couldn’t believe it. After 10 minutes I had the wave to myself and surfed splendid rights in warm, translucent blue waters. While I got thrashed on a few late drops, attempting to pig dog straight into the barrel, I made most of my waves. I’d be lying if I told you that the conditions were perfect, if they were, there would have certainly been a thick crowd. Low tide, fading swell, and plenty of lulls, but still glassy with head high faces. I surfed by myself for over an hour until the next surfer arrived. Twenty minutes later, another appeared. We shared the set waves and again, it was smiles all around.

I’m happy to say I made it out with both my pride and body unscathed, climbing the trail back to the car. Once at the top of the hill, I looked back at the bay one more time and had a moment of immense gratitude for the experience. I closed my eyes and thanked the gods for giving me the chance to dance with divine waves in such a holy place. Honolua truly felt like a religious shrine, and I had made a glorious and successful pilgrimage. Mahalo.