Martech. That’s a nice, short way of saying “marketing technology.” Every time people use MailChimp to send out a newsletter, schedule a tweet using Hootsuite, or sift through Google Analytics data, they’re using martech. But what about emerging tech like augmented reality and virtual reality?

For some, it’s a buzzword. For digital marketers, it’s their bread and butter. It’s also a blessing and a curse.

That’s because marketing technology evolves at a rapid pace. As soon as someone masters the latest tool or technique (think audiovisual production or mobile marketing automation), something newer and fancier comes along, something like augmented reality (AR) or virtual reality (VR).

On the downside, AR and VR are forcing marketers to adapt to a new and uncertain reality. On the bright side, these impressive new tools are also giving them greater power over that reality.

Augmented Reality Is No Longer Just for Gamers

For years, brands and non-profits have used augmented reality to impress and amuse people. Universal Studios brought dinosaurs to life as part of its Jurassic Park 2 promotion. Pepsi Max transformed a London bus shelter into a wild scene filled with tigers and flying saucers. Museums have used AR apps to give people a glimpse of ancient art as it once looked before the colors faded.

The development of virtual reality has followed a similar course. Right now, most people use VR to play games, immerse themselves in stories or learn new things. Whether they want to battle Klingons as part of the Star Trek bridge crew or fly around our planet using Google Earth, VR opens up a whole world of experiences.

That being said, AR and VR aren’t just diversions. They also have the power to disrupt the world of commerce, as more and more businesses have come to realize. As we speak, AR apps are changing how people interact with some of the leading brands, and the future holds even greater promise for digital marketers who are looking for creative ways to blend the real world and the digital world into one seamless experience.

What if shoppers could “try on” furniture just as they tried on clothes. Wouldn’t it be great if they could place that mustard-colored armchair in their living rooms to see how it would look? With augmented reality, they can.

A number of brands are already using AR to transform the shopping experience. Ikea Place, the Swedish-based furniture giant’s AR-enabled app, lets customers see how its products lookwithin their homes. Users simply hold their phones up as if they were taking a picture, and then the app “places” the item in the space. 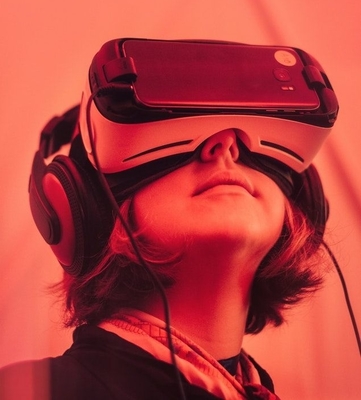 Not surprisingly, Amazon has also jumped on the AR bandwagon, allowing customers to “place” thousands of items within their homes. Other brands let people project wallpaper patterns or paint colors onto their walls. Art.com has created an app that gives people the ability to display accurately sized pieces of art.

And it’s not just home goods either. Want to try on makeup without making a trip to the local mall? Sephora’s lets users scan their face and then experiment with different lipsticks, eyeshadows and even full-on “looks.” The app also teaches people how to apply their makeup to their particular face shape.

AR is not only capable of adding to reality; it can also take away from it as well. Imagine an app that could transform a trip to the grocery store by showing someone only the items they want. A shopper scouring the aisles for gluten-free products, for example, could use their phones to remove the non-gluten free products from view.

Businesses can thank Apple for the rapid pace of innovation. For years now, the iPhone maker has been pioneering augmented reality technology, leading with its ARKit, a platform that makes it easy for iOS developers to add AR capabilities to their apps. That being said, Android is catching up fast, offering augmented reality experiences to more and more users.

What if someone could visit a resort in the Bahamas before booking a vacation? Sit on an airplane before reserving a seat? Walk through a shopping mall in China and purchase items without ever having to board a plane?

Those aren’t futuristic pipe dreams. They’re real VR projects that are already shaking up the world of e-commerce.

Take the case of Alibaba, the Chinese retail chain. It recently used cutting-edge technology to create a virtual shopping mall. Called Buy+, the VR experience also allows customers to “wander” through stores from all around the world (e.g. Costco and Target in the U.S. or Matsumoto Kiyoshi in Japan). After browsing the inventory, the user can simply nod their way to checkout.

Then there’s Lowes. The home improvement store offers virtual reality stations that allow customers to see first-hand what a proposed remodel would actually look like. That way, people feel good about their decision before shelling out thousands of dollars on costly building materials. Many other retailers that sell high-priced items have turned to VR to give people a sneak peek of their products in the hopes of sealing the deal.

When It Comes to Brand Image, Perception is Reality

Other brands are using virtual reality to improve their image and spread their message. Tom’s, a socially conscious shoe and accessory company, takes people on a journey to Peru, where they can see how donated shoes transform the lives of poor villagers.

The New York Times did something similar, sending its most loyal subscribers a pair of Google Cardboard glasses – cheap and disposable VR glasses – so they could take a trip to outer space. Called Seeking Pluto’s Frigid Heart, it was the kind of experience designed to appeal to its highly intellectual audience. By doing so, the nearly 200-year-old newspaper solidified its brand image while modernizing the way in which it delivers premium content.

What does it all mean? Just this: Virtual reality can help businesses and other organizations interact with customers at every point along the sales funnel, from brand awareness to product purchase.

How to Shape Your Brand’s Reality

Will we soon experience an AR and VR revolution akin to the mobile revolution? Maybe. Maybe not. Either way, forward-thinking businesses can’t afford to ignore these two emerging technologies.

Already, 90 percent of major companies (those who make between $100 million and $1 billion) are using some form of AR. As the tech gets better and costs come down, smaller companies will also begin to leverage the power of augmented reality to improve the customer experience and make people’s daily lives easier.

As they do so, they’ll need to figure out how to incorporate AR and VR into their existing digital marketing strategies so that it furthers, rather than distracts from their core business goals.